Just finished reading this.
Posted by Christopher at 16:45 No comments:

I’ve been going to a skin doctor for about fifteen years having them look for cancers. As a blonde-haired, white guy, you would think there would have been a lot. Lots of pre-cancers, yes; but until now, no official skin cancer.

Well, now it’s official: that thing on my leg is skin cancer. Basal cell carcinoma, to be precise. It showed up about a year ago; but I didn’t have it seen to because of the pandemic. Finally decided to go have it checked out. After a biopsy confirmed it was cancer, I had it removed in a pretty simple and straightforward procedure.

Basal carcinomas are pretty basic. They sit and grow in the upper layers of skin. They don’t burrow or spread like other skin cancers can – like melanoma. But, if not tended to, they can cause all kinds of problems, so I’m really glad that this one is history.

Posted by Christopher at 10:06 No comments:

Just finished reading this.
Posted by Christopher at 16:44 No comments:

This was me this morning: getting my first official round of dialysis at my new official facility. I’ve known this was coming for just shy of six years – when a side effect of my bone-marrow cancer began damaging my kidneys.

I’ve had a long time to prepare; but nothing prepared me for the consequences of this first treatment. (I had six treatments while recently in the hospital for eleven days.) Not only did this treatment throw me for a loop, it also gave me the worst “brain fog” I’ve ever experienced, leading to me collapsing on the living room floor. (Luckily, my husband Matt was in attendance and helped me.)

As I write this, it’s been 6.5 hours since the end of my treatment. The brain fog has mostly lifted, but my body feels like it's being remotely operated by one of those guys working a pair of those robot arms. So bizarre.

Clearly, changes will need to be made to my treatment. And they can’t come soon enough.

Posted by Christopher at 16:31 No comments:

Just finished reading this.
Posted by Christopher at 16:01 No comments:

Today is the start of summer camp in many places across the USA: a tentative return to normalcy after such public assemblies were banned last year. This got me thinking of my summers in Phoenix, in the 1960s and 1970s. I never went to a sleep-away camp, but I did go to a day camp.

Every weekday morning, I would walk a short distance to a public bus stop near my house. A yellow school bus would come by and pick me up. We drove for a while then stopped at a building. All I remember about it was that it was surrounded by a lot of trees. Once there, we would do various activities, including singing, art class and swimming, I’m sure we did lots of other things too; but that’s all I remember.

At the end of the day, the bus would take me back to the same stop and I would walk home. Every Friday (or every other Friday) rather than being taken home, we would drive into far west metro Phoenix to the Estrella Mountain Park. There, we would camp for the night in tents, cook food over a fire and sleep in the quiet of the desert. The next morning, my parents would drive out there to pick me up. I remember enjoying my time at this day camp with overnight camping. I just wish I had better memories of it.

[Photograph is of a small rock paperweight I painted on one of the art days.]

Posted by Christopher at 10:32 No comments:

Am reading this.
Just finished reading this (again).
Posted by Christopher at 16:03 No comments:

The drug overdose that nearly killed me

On Friday, 30 April, I almost died from a drug overdose of a prescription medicine.

You often hear about people having similar experiences; but it my case, there’s a twist: the drug was prescribed by one of my doctors who ordered a dosage amount that was about sixteen-times more than he should have. In fact, it turns out that – considering my damaged kidneys – I should never have been prescribed this drug at all. 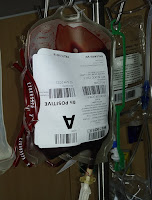 A few days after I began taking this drug, I started to cough up blood. Copious amounts of it. I could not sleep on my back without aggravating my lungs into bleeding more. It appears the overdose caused the alveoli in my lungs to burst (causing the bleeding) which greatly reduced the ability of my body to process oxygen.

The day I went into the hospital was – by coincidence – the day before I was to re-start my monthly chemo regimen. I called my chemo-doctor office to inquire whether – in light of my coughing up blood – I should hold off starting the chemo. Luckily for me, my chemo nurse, Leslie, told me to hang up the phone and go to the emergency department.

(I’m stoic by nature. If I get a little sick or have a little injury, I just deal with it and move on. As I have joked a lot this past week, my arm would actually have to be severed from my body for me to think it was time to go to the hospital. ["Tis but a scratch," in the words of the Black Knight.] But, Leslie is a smart cookie. I respect her knowledge enough to know if she said it, I should do it.)

So, my husband, Matt, dropped me off at the hospital Friday afternoon – where I was admitted almost at once. Upon examination, it turned out that I had lost so much blood that my hemoglobin level was 6.3 – below the acceptable 7.0 and far below the desired 8.0. So, the transfusions began, four units over the next week, trying to get my blood level up to where it should be. (Keep in mind that my bone-marrow cancer and damaged kidneys greatly reduce my ability to make new red blood cells.)

After eight days in the hospital, I realize how very close to death I came, and how very lucky I had been to call my doctor and speak to Leslie.

Posted by Christopher at 10:23 No comments:

In 1996, my “new” boyfriend, Matt, and I made our second foray into southern California for a little visit. It was an ambitious trip that included a tour of the Warner Bros Studio, a visit to Union Station in Los Angeles, a quick kiss behind the abandoned Perino’s Restaurant on Wilshire, staying in a hotel across the street from Charlie Chaplin’s old studio, a drive by Ramon Novarro’s house in the hills, a quick visit to the Griffith Park Observatory, then the Stephen Birch Aquarium and the “Nations of the World” bungalows in Balboa Park in San Diego, AND Disneyland.
As usual, we had our trip planned down to the minute, with just enough time set aside to drive from place to place. I believe in being organized when I travel. You get to see and do so much more when you plan well.

But then, a wrench: while touring Warner Bros, we discovered that not only was it the fortieth anniversary of the wonderful film “Giant” (1956), but the film was being shown as a special engagement at the Cinerama Dome in Hollywood. I had seen the film before and loved it; Matt had not. Well, you don’t often get a chance to see a classic wide-screen film on the kind of wide-screen screen for which it was intended, so we decided we had to go see the movie.
The movie clocked in at about 3.5 hours, so of course it threw off our schedule, but it was worth it. There is probably no cinema like the Cinerama Dome in the entire world. It was a real thrill to sit in the darkened theater, watching this sprawling Western with Elizabeth Taylor, Rock Hudson, James Dean and Mercedes McCambridge.
Now, comes word that the Cinerama Dome and its parent company, Pacific Cinemas, are being closed permanently owing to the virus. To say it is a great loss to cinema is an understatement. Since it opened in 1963, it has hosted hundreds of films, many made in the large 70mm format – in which the film image stretches far to your left and to your right, immersing the viewer in the story of the film.
If the Cinerama Dome is not saved, it will be an irreplaceable loss to the film-going public.
Posted by Christopher at 16:22 No comments:

Books I Have Written